In fall of 2015 JD and I were contemplating whether or not to have another child. We talked about it often and definitely prayed about it. During that time I thought about the things I would look forward to if I were ever to get pregnant again. One of those things was a gender reveal party.

I hadn’t even heard of a gender reveal party until a couple of years ago, but once I did I couldn’t shake the idea. How exciting! Finding out the gender with your closest family and friends. That I definitely wanted in on.

So even though we decided not to have another little one, God had other plans, and while adjusting to the journey I quickly started throwing ideas together for a gender reveal. Then I started poking around pinterest and getting overwhelmed.I was in my first trimester and exhausted, feeling ill, and just not in the greatest frame of mind. How was I going to pull off a gender reveal party? Cheaply. I was going to do it cheaply. I soon realized that this party could be what I wanted it to be, not everything I was seeing on pinterest. It wasn’t going to be as elaborate as my other parties because I simply wasn’t feeling up to it and that was ok. Also, we were having it at our house which meant the crowd had to be really intimate, so it wasn’t going to be some huge affair. All of that was more than ok with me.

So we pulled it off. We did Twinkle Twinkle Little Star as the theme. Instead of me doing my usual treats table where I make a million sweets, I simply did a Sundae bar and I’m happy to say that it was a hit! We had a ballot and did stickers to show how everyone voted. Then my friend Michelle made me this amazing Star pinata to use to reveal the gender. We slipped the envelope to my sister-in-law and she was the only one of us to know the gender up until the reveal. Food was simple. Burgers, hot dogs, chicken salad, fruit, potato salad, and of course, cake. 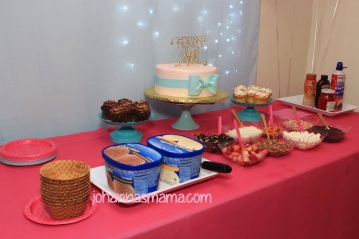 It was a good time had by all, and the best part was, I did it my way. Ok, enough of that. Ready to know what we’re having? It’s a….

GIRL! Another princess to spoil. Awww, we can’t wait to meet you Jelly Bean! You’re already so loved! 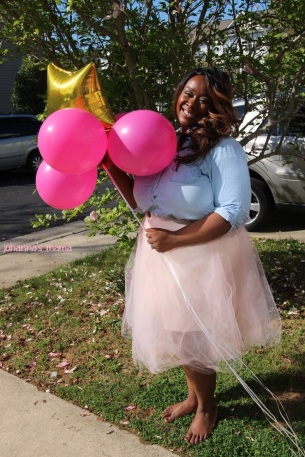