I am starting the Johanna’s Mama  Dads are Awesome! series 2015 with a reflection on my own father.Although my family isn’t exactly traditional, my hope is that you see God’s grace in my life throughout this post.

The year was 1980. After months of trying to become pregnant, Sylvia gave up and concentrated on weightloss instead. It was going beautifully! She was enjoying the new body she was beginning to cultivate. Unfortunately she noticed she was getting queasy and something wasn’t quite right. She sat in the doctor’s office and they said the three little words she had given up on hearing: You are pregnant. And at that very moment her life changed forever. Her marriage too.

The relationship she had with her husband was rocky and continued to decline due to his alcoholism. While pregnant, Sylvia was verbally and physically abused. Finally she decided that she had enough. She asked God that if it was his will, that he end it. Show her a way out. The very next day her husband left her. 30, very much pregnant, and alone away from her family, she finally found peace. She washed her hands of her marriage and kept moving forward. That cold December, I was born.

That is part of the story of my birth that my mother told me a few times in life. She held it in until I was older and able to understand and handle the circumstances. She never wanted me to hate my biological father. She wanted me to love him in spite of. In spite of how he treated her. In spite of the fact that I barely knew him. In spite of the fact that he was still a functioning alcoholic. And I did, love him. I loved him with the love of God, as she had taught me to do. Honestly, I think there are three factors that kept me from hating my biological father – My mother, my God, my dad.

Some folks call him Mack, but since I was a baby I’ve only known him as dad. He came into my life when I was about 1 1/2 years old. My mom tells me that he actually sat her down and told her how much he loved me and wanted to be apart of my life. They weren’t married. They never married. It was the oddest relationship on Earth, admittedly. He lived ten minutes away from us. They courted, but 18 years later decided that it was best they parted. They remained saved individuals while courting. I honestly believe that my mother enjoyed the idea of not having to worry about sharing her space or having real intimacy, but that’s another story for another day. I’ve been told that babies would look at my dad and cry out of fear because he looked stern, but not me. I just smiled and laughed. It seems like I chose him as much as he chose me.

Because of him, I never knew what it was like to be a fatherless girl. Some of my fondest memories are tied to him. He made sure that I went to every circus, every monster truck rally, every event in the DC area that was kid friendly. He helped make my memories. And he loved me. For 18 years of my life I never heard him say I love you. I didn’t even realize that until it was haphazardly brought to my attention. It didn’t matter. I knew it. I never second guessed whether or not he loved me. He showed me so overwhelmingly well that I knew. He was there for me all the time. He was present. He didn’t live in the house with me, but he came running when I needed him.

When I was 7 years old I sat up screaming in my mothers bed. That night I had a monster of an Ear ache and it was trying to take me out! I cried and cried and cried. My mother tried to sooth me, but all I could say was “I want daddy!” It was 1am. My mother made the phone call to my dad letting him know what was happening and that I was screaming for him. And he came. Of course he came. That was the kind of father he was. He came and we all went to children’s hospital where I was given antibiotics and eventually drifted off to sleep.

I rarely remember my dad saying no to me. He spoiled me real good. He also took time with me. We would go on rides through the country, getting bbq in some far off place surrounded by nothing but clear land. He took me to school every morning, and helped pay for my schooling too. He took me to my eye appointments, the dentist, and to parties. He showed up for every recital, every performance, everything involving me. The way he loved me was perfection.

My dad and I don’t have many heart to hearts because I don’t think either of us are that sappy, but he was always my safe place. A place of calm in the rocky storms of my life. I go to him when I need to hear the familiar because it makes me smile and I instantly begin to feel better. Every time he calls and I have a cold or strep throat, I can count on him to say “have you taken your vitamin c? Get you some tea and squeeze some lemon into it. That’ll cut that stuff right out!” Oh, that makes me smile so. Sometimes I quietly say the words along with him, happy that he hasn’t changed in all these years.

He was there on my first day of school, he was there at the father daughter dance. He drove me away to college, and moved me every single time I needed to. He gave me an allowance when I was fresh out of college and broke, and he gave me away on my wedding day. He was there to hold my babygirl the day after she was born, and he has fallen in love with her too. He may not be a perfect man, because no one but Jesus is, but he sure is the perfect father. Because of him, I don’t know what it’s like not to have male attention. Because of him I know more about who I am, what I will accept, and what I won’t. Because of him I’ve learned to be a little more patient,and a lot less angry. He has shaped and molded me as much as my mother did and for that I am forever thankful.

For the past year I have had quite a few dinners with my biological father. It was strange to me in the beginning that it was much more like two acquaintances getting to know each other. I thought getting to know him would fill something inside of me that I didn’t know needed to be filled. It didn’t. It didn’t because my dad had already done that work. Isn’t that God’s grace? 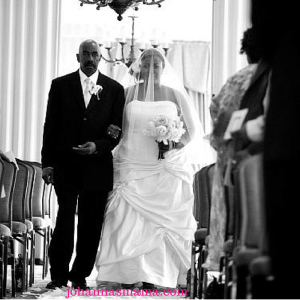 My story is rare. A man that comes into a woman’s life and decides that he is going to be a father to her daughter, no matter what, and commits himself to that role for life. You don’t have to tell me that I’m blessed, I know it. I don’t take it for granted, and my heart will always hold my dad in the highest regard.

This post is a part of the week long series Dads are Awesome!, which runs from June 15-21 in honor of dads that rock everywhere.

Recently I had an idea spark, and I frantically took to twitter and facebook to try to make it happen. A series to celebrate fathers during the week of Fathers Day. How blessed am I that great writers answered my call? This series is very important to me. Fathers are so often overlooked, seen as babysitters, or as secondary parents. They just sit in the background merely existing, if they’re around at all! They are deadbeats who don’t really care about raising their children, they just want to get out of it. They don’t have a connection to their kids the way that mothers do. They are only meant to provide. Those are the messages that society tells us and many believe them. Well, I don’t. I am blessed to be able to say I see great fathers all the time! It’s not rare. I see them on my commutes, at the grocery store, in my church, in my family. I see them everywhere. Father’s that really give a darn about their daughters and sons. Father’s that want to see their families succeed and prosper. Because of this, I wanted to honor fathers this Father’s Day week. I want to share amazing stories from amazing writers about just how awesome father’s are and what an impact they have on our lives. I hope you enjoy this series and really take it to heart. I pray that it causes you to pause and pick up the phone to thank the men in your life that rock as father’s. They deserve it.

A Melody with Her Lyric In Search for the Perfect Pitch